The UK Landscape of Tantra 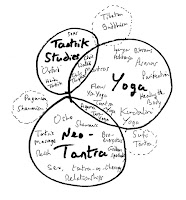 As you may know I have been something of a “tantra geek” for decades, trying to figure out what tantra really is. At one level this is simple; Tantra is practices to awaken you to your Essence-nature. However this doesn’t really engage with the range of things that people tend to associate with tantra.

This weekend I have been at a tantra workshop in London with over 100 people and I only knew two of them. Generally, at workshops I see the same faces, so what was different? I realised that the vast landscape of tantra that I had come to appreciate was unknown to most people in the tantra world I usually inhabit. I was in a different continent. The workshop was at Triyoga in London with Christopher Wallis author of Tantra Illuminated and was mostly the London yoga crowd; youngish women who had some intuition that yoga is about more than tying your body in knots or trimming your thighs; the sense that yoga has its origins in tantra.

A major factor in distorting the picture of what tantra is comes from the fact that tantra is “packaged” in workshops and sold in the marketplace of events that will make you feel better. Sex sells. The West is great at propagating things through society by turning them in to a commodity and then promoting it. “How to have bigger orgasms” will be an easier workshop to sell than “Facing your own death”! Though the latter is more tantric as far as the traditions of tantra are concerned. Teachings easily get turned in to a form of therapy, so yoga joins the fitness industry, meditation and mindfulness joins the mental health world; and tantra is a form of sex or relationship therapy. As tantra is awakening to your essential nature; it often will be an uncomfortable process. Literally one of dis-illusionment. Waking up to reality. The by-product is deep joy but that, or even pleasure, can never be the aim of tantra. The deepest traditions of tantra are all non-dual so everything must be embraced.


People who attend tantra workshops naturally believe that what happens in a tantra workshop is tantra. The reality is that much of the content of a tantra workshop comes from humanistic personal growth methods from the therapy world. Even things, like the system of seven chakras in the body with comes mostly from Carl Jung, the psychoanalyst, not traditional Indian sources.

The most visible tantra in the West, often called Neo-Tantra in the last 30 years comes from people connected with; or at least inspired by Osho. Much came via the SkyDancing approach developed by Margot Anand. To those who sat with him; Osho was inspiring, and a great facilitator of a meeting of East and West.  Many amazing people emerged from the Osho world. He however, had little connection to the Indian traditions of tantra; neither by direct lineage, by teaching, by knowledge of Sanskrit or by extensive practice. He was a great orator, showman and reader of books (not writer; he never actually wrote a book). Many of his practices owe more to Western Reichian therapy of the 70’s with an emphasis on energy rather than on consciousness or awareness. His followers embraced these practices - particularly the sex, even though Osho warned that they were getting it wrong and that tantra is based in meditation. Our ideas of tantra as being principally about energy, sexuality, and the feminine come from here with some help from the emerging feminist and goddess-spirituality world. 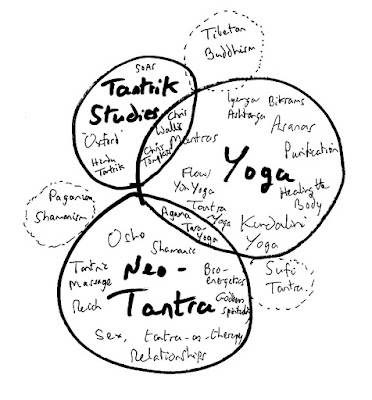 In this map of the UK tantra landscape; as well as the very visible “continent” of neo-tantra there is another gradually increasing “island” which is more connected to Yoga and its maturation in the West. When yoga was brought to the West about 120 years ago by figures like Vivekananda it was "sanitised" for conservative Westerners. His guru was Ramakrishna a tantric Kali-worshipper but this was played down. Tantra has been around in the West for longer than most realise; The Tantrik Order of America was founded in 1905 and in Britain, via early Orientalists like Sir John Woodroffe, there was some interest in tantra and a great deal of interest in Indian philosophy for the last hundred years.

Generally, in line with the times it was the more conservative, Vedic traditions which dominated yoga; closely connected to notions of purity and health with hatha yoga as a way of purifying the body. Yoga naturally was marketed as healthy for mind, body and spirit and was placed in gyms and health centres. It brings the notion of the discipline of regular practice – whereas neo-tantra is more comfortable with the idea of "Do whatever you feel like whenever you want to". Yoga, connected with the right hand path, is more masculine, more ascetic and renunciate. It easily connects to striving; which can feeds the ego.  Nowadays, some yoga teachers are interested in learning more about yoga's origins within tantra and study Sanskrit or learn more about mantras; an essential component of traditional tantra. Within the broad field of yoga much is from twentieth century inventions like Ashtanga and Iyengar yoga and other practises such as Yogi Bhajan’s Kundalini Yoga.

It was in the modern yoga world; at Triyoga that I was seated in a large group listening to Christopher Wallis giving a taste through the texts of the last two and a half thousand years of experiences that gave rise to yoga and tantra. Tantra yoga is a householder tradition not renunciate and monastic but embracing of all aspects of life. It is slower and gentler without self-harming or self-negating practices.  Christopher; along with Christopher Tompkins are the most widely known of modern scholar/practitioners who are engaged in the process of translating and understanding the many ancient texts which have never been studied.  They connect to the third continent of tantra. Tantrik Studies.

From the perspective of most neo-tantra with its emphasis on direct experience and the old 70’s humanistic therapy slogan of “Get out of your mind into your feelings/body!”; the study of texts and the traditions of tantra is a waste of time. It is true that one of the meanings of tantra is “practices” or “methods” so doing it is important. It is also true that most spiritual traditions require three things; the correct view; the correct practices and then the correct goals. The generations of practitioners and lineage-holders through history have accumulated a great deal of relevant experiences and information to help and even more, can alert us to the pitfalls and dangers on the path. Therefore the study of the thousands of texts of tantra is important. I am astonished at what a small proportion of the texts have ever been translated and studied. Perhaps only 10% as it is a very long, slow and skilful process to do so.

As it is intensive of time and resources it is usually connected to universities. In some, like School of African and Oriental Studies (SOAS) in London, it is primarily done by academics who are not practitioners. In other places like Oxford University there are more who are also practitioners including Prof Alexis Sanderson the foremost scholar of Kashmir Shavism.  There are also others who have independently learnt Sanskrit and translated tantric texts for many years such as Mike Magee and the Hindu Tantrik Site. These days, scholars all over the world are linked by the internet. Most neo-tantra is implicitly dualistic as it starts from Shiva-Shakti or feminine-masculine and is therefore coming from a place of separation. The deeper spiritual traditions, including mine; Kashmir Shavism are non-dual, starting from Oneness. There is only Consciousness (or the Divine).

Some of practitioner-scholars of tantra overlap with the yoga world; like the “two Christophers” (though neither are based in UK) . Some of the yoga world overlaps with the neo-tantra world such as the Romanian originated schools based on MISA such as Agama Yoga and, in UK, Tara Yoga who run a London Tantra Festival. Outside of this map and not quite fitting on any of the continents is the world of Tibetan Buddhism which is all tantric. It is strong on ritual and visualisations and has generally derived from the monastic traditions of Tibet and therefore does not fit with modern neo-tantra and its emphasis on sex or yoga or the text-based studies. It has a long history in UK with Samye Ling starting over 50 years ago. Rigpa, as with Agama Yoga has recently been in the forefront of scandal over improper sexual boundaries from teachers.

Somewhere on the edges of the three circles are things like Sufism - the tantra of Islam. Kabbalah -the tantra of Judaism, Paganism, the remains of the Celtic tantra and Goddess spirituality; the resurrection of ancient women-centred practices.

As tantra embraces all aspects of life we can embrace, or at least be aware of every area of tantra in UK without thinking one is better than the other. Tantra has always evolved but has some core principles that really do not change over time.

I hope this brief map can help give you the wider territory of tantra.  Namaste!