Many monks, many methods 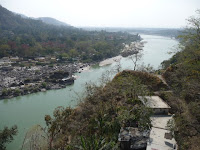 Namaste, I'm in Rishikesh the "Yoga Capital of the World" in the foothills of the Himalayas where the Ganges is still comparatively clean and fast-flowing between forested hills. There's a lot of yoga here...many ashrams and many courses.
In the West yoga has been marketed as a health and fitness aid..yoga for bums and tums and to stay trim, flexible and healthy. A sort of cleaned up version of yoga has been imported into the West for a long time - since Swami Vivekananda went to the West in the 1890's. It has been stripped of its tantric part and then cleaned up and stripped of its central core as a spiritual practice. The tantra had already been pushed well underground from eight hundred years of occupation of India by Muslim, Portugese and then British puritans. For example Vivekananda's guru was Ramakrishna who certainly practised Bhairava tantric rites that your average Sunday school teacher wouldn't approve of.
Swami Satyananda Saraswati, Founder of the Bihar School of Yoga wrote ..."yoga and tantra are in essence the same system......tantra is the mother and yoga is the son......asanas and pranayama form a most essential part of the tantric system."
There are thousands of books on yoga and varities; Jhana Yoga, Bhakti Yoga, Karma Yoga, Raja Yoga, Hatha Yoga, Laya Yoga, Kundalini Yoga, Tantra Yoga, Kriya yoga, Japa Yoga, Iyengar Yoga, Vinyasa Yoga, Ashtanga Yoga, Bikram Yoga and many more. Patanjali was the first to write any of the practices down, about two thousand years ago. In his sutras (which were not text full of illustrations of how to tie your body in knots!) , he makes clear that the purpose of yoga is meditation and the purpose of meditation is to realise Atman; union with the Divine. Manifesting the resonance between the microcosm of your body and the macrocosm of the universe. Its not about health or even about energy. Yoga should therefore be done with eyes closed as an interior practice focusing on the chakra or the internal flow of subtle energy sensations.
The West, of course as a materialistic culture wants material results; a better shaped body, better stamina, more flexibility or a longer life. These may be a by-product of yoga but they are not the point. When westerners came to India they wanted yoga from the predominantly Vedanta-based ashrams. So the ashrams obliged their rich customers; but the Vedantic tradition of India is opposed to tantra. Vedanta is only interested in the top three chakras. Vedanta was religion for generally intellectual Brahmin males. So yoga gets again restricted.

Anyway, back to all these varieties of yoga. It is simple, they all suit different sorts of people. Tantra and yoga are very pragmatic. Jhana Yoga and also some of the Kashmir Shavite practices are best for people who are more intellectual; Bhakti Yoga, the yoga of love and surrender to the Divine is best for people who are naturally centred in their hearts, Karma Yoga is great for those intersted in the social and political world around them Mahatma Gandhi was a great Karma Yogi. Of course the greatest and first yogi was Shiva. Whatever you practice do it fully, regularly and with awareness. The best practices are always the ones closest to your natural interests. From them great bliss will arise.
Posted by Martin at Saturday, March 21, 2009 No comments:

It's pretty amazing to be in a city where the lingam is everywhere. Walking by the Ganges, or through the narrow alleyways of the old city of Varanasi; in alcoves, in little shrines, glimpsed through windows and doorways or embedded in the pavement are shivalinga. They do not represent the phallus, or vajra (penis) - it is the other way round. The phallus is a particular form of the symbol (Jung would call it an archetype) of the lingam which represents Shiva and is a reminder of the vertical dimension of life; the connection with Spirit.

Even more amazing is that they are not dusty old relics of a bygone age. Most, are freshly decorated with flowers and colours. In the recent festival of Mahashivaratri they are annointed with Ganges water, milk, curd, flowers, garlands. Some are tenderly dressed like precious children.

In the West anything that could connect with associations to the lingam is either ridiculed, shamed, shunned or analysed in reductive Freudian terms. The celebration of anything like this we have left is the Maypole; not long now till May day!
Posted by Martin at Friday, March 13, 2009 No comments: