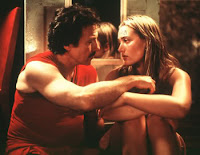 This is an interesting and complex film by Jane Campion which explores spirituality and sexuality. It stars Kate Winslet as Ruth a young beautiful woman from a pretty dysfunctional Australian outback family who goes to India and meets a guru in an ashram and falls in love with that spiritual, peaceful life. Her family trick her in to coming home and then hire an elderly American to de-programme her from the cult (as they see it). Most of the action on the film takes places over three days with the two of them in an isolated house in the Australian desert. It is intense, emotional, erotic and very charged.

The turning point comes when he awakens to the flames of her burning her white sari. This is also symbolically the fire of kundalini awakening in her. He goes out and she is completely naked in the desert. She pees standing, showing she is letting go (water also symbolises the Svadisthana, the second chakra) and then she seduces him. He is not able to meet her powerful awakening sexuality. She realises that she can't get close to people and he shows her something about the need for simple kindness. It gets more complex still when she puts lipstick on him and dresses him as a woman not just to defeat his machismo but to open him to deeper sexuality than conquering. She initiates him into deeper spiritual sexuality and he sees her as a goddesss. It ends a year later with her back in India with a more grounded spirituality which includes sexuality.