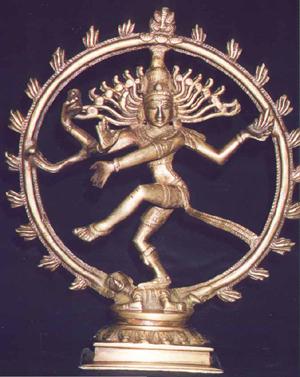 In Christianity most of the images are rather static, a figure on a cross is stuck there and you can’t imagine the Virgin Mary dancing. Tantra often uses Indian figures of Gods and Goddesses because they are usually depicted moving. Most of the Goddesses are pretty active and even Shiva where more of his many forms are sitting in meditation; there are common ones like Shiva Nataraj who is dancing. In the upper right hand, he holds the drum that calls the world into creation, whereas in the upper left he carries the destroying fire, symbolizing life and death, order and disorder, creation and destruction. His lower right hand is raised and the palm is turned outwards, in a gesture that means, “Don’t be afraid; it’s All Right,” because  as his left hand shows; he is dancing and treading on a small figure on the ground; dominating greed, ignorance and the possessive small ego.  Shiva is the Lord of life and death; creation and destruction.

With some of the Goddesses, such as Kali it more obviously looks like destruction with her large knife and necklace of severed heads. Kali cuts off heads representing the ego. Chinnamasta also has her own head severed and the garland of skulls. It is very clear that destruction and creation go hand in hand. The dance is invariably of both creation and destruction. When a painter puts a mark on a canvas to start a painting, the pristine emptiness of the canvas is gone for ever.

Popular Western ideas of tantra with their emphasis on sexuality can seem a long way from many of the tantriks of India with their rituals in the burning Ghats. However sex, also requires surrender and a letting go of the small ego into bliss and ecstasy as the French for orgasm la petite morte (the little death) shows. The preparations for such tantric practices have to include purification, ritual and meditation otherwise they just enhance the ego and become another means of self-delusion. Sadly, in the current enthusiasm for festivals of "tantra" as “conscious sexuality” there is much more interest in the sexuality than in the consciousness.  Today, in front of  a statue of Shiva Nataraj the Lord of creation and destruction I am writing something for the funeral of my mother who died last week at the age of 91. At the end of the simple Quaker service I want them to play The Beatles, Here Comes the Sun as people leave the Western version of the burning ghats; the crematorium.
Posted by Martin at Thursday, January 30, 2014 No comments: