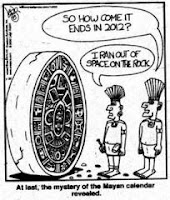 Welcome to the Winter Solstice.  My prediction is that at the end of 2011 there will be 2012 and after 2012 there will be 2013. The world will not end despite the beliefs of some fundamentalist religionists and some New Agers alike. The Mayan calendar -  all 3 Mayan calendars are less accurate than the old Roman calendar and don't predict the end of the world. The astronomical descriptions; such as the earth is crossing the centre line on the galaxy are rubbish (see 2012 apocalypse and  2012 hoax ) . Dates are simply numbers and astronomy and astrophysics are fairly well understood.

Things are changing faster and faster in the world in complicated and contradictory ways. I like the title of one talk a few years ago: "Things are getting better, things are getting worse and, things are and always have been perfect." In tantric terms this age is known as the Kali Yuga when people are furthest from Source, but the age is a very long one and transition out into another is a slow process not a sudden change.  Ancient texts suggest that tantra is the best practice in the Kali Yuga.

I have got predictions for next year. Here are a couple. Several countries will stop pricing commodities (perhaps including oil), in US dollars and the US will stop being able to print dollars to buy commodities and have to start living in the real world. It will realise that its economy has been totally unviable for years and people will begin wake up. The resulting civil  unrest will unleash the powers of the US State, which has been waging a sort of hidden war on much of the world for decades, and turn them against its own citizens. This is what the FEMA Camps are for (see You Tube Video ). In Britain, a report has called for rioters to be shot.

The best thing to do? Meditate and protest.  Protest when you can and support the Occupy movement. Talk to your neighbours and build local as well as global connections - remember the internet can be controlled or switched off.  Learn to grow vegetables. Globally, learn to speak Chinese as they are the major economy which is really growing thanks to isolation and a ruthlessly practical government. Practice meditation yoga and tantra. Make love. Be love. Mark the Solstice and have a good year. Namaste!
Posted by Martin at Thursday, December 22, 2011 No comments: