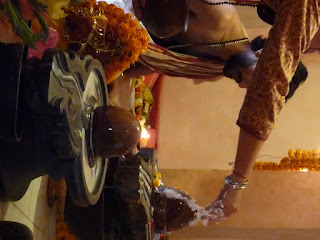 Maha Shivaratri, the spiritual night of Lord Shiva, is considered to be the most sacred night of the year. There is fasting during the day and the puja goes on all night with mantras to Shiva and anointing the shivalingam with water, curd, honey, and flowers.

It happens the night before the new moon and is a chance to honour Shiva and the masculine principle of consciousness and awareness. For everything is consciousness and it is on this foundation principle that the world is danced into being through the awesome creative power of Shakti.


There has probably never been a time in history when the principle of the Divine Masculine needs to be honoured and affirmed as it does now, for it is precisely the qualities of the Divine Masculine that can create the space and the safety for good mothers and mothering to happen - and tomorrow is International Women's Day. Far too often, in many cultures across the world women are trying to hold both poles of masculine and feminine at the same time and be mother and father to their own inner child and to their "outer children". Men are physically absent for many reasons or emotionally absent from their own lack of connection to the Divine Masculine and their historic lack of good enough mothering and fathering. They then end up as wounded, disconnected and dangerous; perpetual teenagers fuelling the cycles violence that are destroying the Earth. Celebrate the masculine as the force of awareness, consciousness, presence and the Truth of who we really are.

There are practices in tantric kriya yoga, (for men and women) to support awareness and presence. They involve opening ajna chakra; the third eye. Next weekend (11th - 13th March) we are running a workshop in teaching an ancient powerful method; the Cobra Breath to do this. See Transcendence Website for more details. Click Here.
Posted by Martin at Monday, March 07, 2016 No comments: