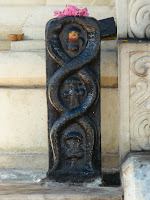 In January and February in Tiruvanamali, it is the satsang season. Some great teachers come, including the lovely Mooji (www.mooji.org) and the very skilful teacher, Miranda McPherson (www.awakeningwithmiranda.com). It draws many hundreds of Westerners to the sacred mountain of Arunachala with the ashram of Ramana Maharshi at its foot. Indians don't seem to be that interested in these satsangs. The Westerners range from some accomplished practitioners of meditation and self-enquiry (Ramana's method), via many earnest seekers after Truth; to the seriously lost and confused. Some have come mainly to party, avoid their life and drift around India for as long as possible.
I met a beautiful, intelligent young French woman who had been living for several months in a cave high on the mountain. She came to Arunachala to die and seemed a little disappointed that she hadn't died. I believe that as a teenager she attempted suicide a few times and that wouldn't be surprised if that didn't include the slow suicide of anorexia. I suggested to her that La petite mort est mieux que la grand mort (orgasm is better than death) in the hope that she would wake up to the difference between physical death with its wish to separate from the body; and the letting go of the small controlling ego which knows only fear. Surrender into the body, into life and into love is what is appropriate for women in their 20's not trying to kill themselves. Ego death and physical death are very different and the confusion is behind some suicide attempts; whether the exotic spiritual ones, or the more usual attempts. Tantra is clear on all this - practice letting go into the life of the body, the sexual life of pleasure and bliss. Do this with great with great awareness. Tantra is as old as Advaita and not opposed to it. So much of the spiritual teaching of India, including Advaita Vedanta and yoga teachers are only interested in the top three chakras of the body; heart, throat and third eye!
Arunachala is very connected to Ramana Maharshi's life giving Advaita teaching and his powerful method of self enquiry (Who Am I?). The problem with this is that it is only one method and doesn't suit all. It tends to the ascetic and non-relational. If I am consciousness without any limits then there can be nothing outside to relate to. Ramana's main relationships (apart form his mother whom he tried to get away from but she came along anyway) were with Arunachala, the mountain itself and with a cow! The 20' and 30' something people; particularly the women, need to connect to their bodies, their senses, their sensuality and their sexuality and celebrate life. Most will be in relationship and have children. The only method their are being taught - self enquiry, doesn't acknowledge or relate in any way to that and by omission gives a life of asceticism and internal enquiry. They also don't realise that in India many of these spiritual practices were for men over 50 who had already had a career and brought up a family. Tantra teaches methods which embrace life, relationships and the world as part of a spiritual practice. See (www.tantra.uk.com). Perhaps we should run some tantra taster workshops near Arunachala next satsang season!
Posted by Martin at Wednesday, February 17, 2010 1 comment: 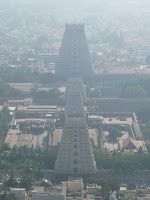 Mahashivaratri is one of the four biggest festivals in India. It is the night of the new moon when Shiva and Parvarti got married and a celebration of Shiva and consciousness. In Arunachala, the sacred mountain of Shiva in Tamil Nadu near the huge Shiva Temple at Tiruvanamali, many people practised giriparadakshina, the 14 km walk around the mountain. Around midnight we came to the 28 storey tower at the main entrance to the temple. It was not as crowded as we had expected. There we learnt that earlier that afternoon, some pandits or priests had announced that Mahashivaratri was postponed and would now be celebrated a (lunar) month later! It could only happen in India, which gives such wonderful opportunities to let go of expectations and of control and to surrender to the glorious chaos of it all. Happy Chinese New Year - the year of the Tiger. At least they didn't cancel that.
Posted by Martin at Wednesday, February 17, 2010 No comments:

Right now in Haridwar in Northern India the Maha Kumbh is on, sometimes called the Kumbh Mela. It happens every three years and is a huge religious fetival of bathing in the sacred Ganges river to remove suffering and karma. It is huge - think a hundred times the size of the Glastonbury Festival. I am fortunately a long way away in South India.

A Kumbh is a pot which in Hindu mythology contains the nectar of immortality. It was in the depths of the ocean and when they stirred the ocean to try and retrieve it, the waters started to release many treasures as well as evil elements. Some poison escaped which threatened to contaminate the entire universe. At that crucial moment Shiva stepped in and swallowed the poison with one large gulp. He held it in his throat and as a result his whole body turned to a deep shade of blue. The waters of immortality from the Kumbh in the Ganges cleanse the soul and body on the ten ritual bathing days of the festival when many millions immerse themselves in the Ganges.

So why write this? Kumbh is a pot or container which holds the netar of immortality. Also in India there is a fire ritual done in a Havan Kund a fire pit where the sacred fire is honoured through mantras and offerings. The word we have from Medieval english which comes from these two words? Cunt! In tantra we often use the word yoni which in Sanskrit means sacred place or altar but we could well be reminded that the Old English (I think it is found in Chaucer) conncects directly with the ancient traditions and myths being honoured now in Haridwar. There are tantric texts which say that a man can become enlightened just by meditating on the yoni. You could start by meditating on it for one lunar cycle - 28 days. Now you didn't get homework like that when you were at school! Namaste from Tiruvanamali.
Posted by Martin at Monday, February 08, 2010 No comments: