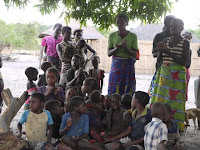 I am back from two weeks in Western Zambia with many memories. Strongest is the sculptured groups of black mat skin. The women with silent wide eyed children; the large group of girls, some carrying younger children and small boys. There were a few young men, usually near the edge of the group. Most of the men were in the fields. It was as if they were posed for a photo of beauty, dignity, with an air of welcome; unperturbed by the differences which bothered me so much.  We arrived in a gleaming white Toyota with plastic chrome; four white middle aged or elderly men and a couple of local people.  They had very little in some villages; no cattle or goats or chickens,  just huts and a diet of maize and cassava. They found some chairs and we sat in the shade of the tree on the poor sandy soil. Nearby was the hand pump; the subject of our visit. 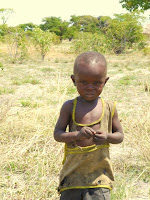 I notice how in the West poverty is shameful and differences awkward. They seemed at ease with this and peaceful, open, welcoming; shaking hands at every opportunity. No one could envy their suffering, their very basic existence and there is certainly nothing ennobling in poverty. But they can more easily attain a natural relaxed state in a world of few distractions and little pressure beyond the daily tasks of survival.  No mobile phone signals reach here yet; no satellite dishes, no internet; (but not for long I fear).

We came to see how they were managing with the new well made after they had accepted out demand that they construct and use pit latrines and wash their hands. A small imposition on them which can save the lives and the sight of their children, nearly half of whom will otherwise be struck by simple illnesses.

I hope there is some way that their lives can be improved without being spoilt. That the usual development doesn't lead to an exodus of the young from rural life to live in the sprawling cities where  half the world's population now live. I don't know what would make that possible but at least basic sanitation and water make health a real prospect.