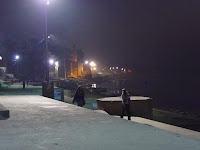 Its five thirty in the morning and for the first time in India, I feel cold despite a fleece. The crescent moon is still high in the night sky waning towards the New Moon for the festival of Mahashivaratri here in Kashi (also called Varanasi and by the British , Benares) in a few days time. A few bright candles float down the Ganges in front of me. To my right a fire flares as a chai stall wallah lights his fire for the first brew of the day. In the distance I can see the fires of the main burning ghat as more bodies are dispached, fortunate enought to be burnt next to the Ganges at Varanasi - every Hindu's wish. This city of Shiva is where he traditionally appeared as an infinite pillar of fire to win the contest between Shiva, Visnu and Brahman. It is called the shining city and is full of shivalingams every few yards in the street. 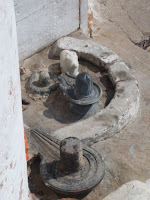 Nearly allways with some fresh flowers or bel leaves on it. We are more used to associating fire with Shakti as the fire of kundalini than Shiva the fire, from his third eye which can turn opponents to ash. The boatmen are coming now, looking for trade. The dobhi wallahs are starting their day of thrashing the dirt out of clothes in the river. The sky ahead becomes redder, soon the sun will rise it will warm up and I can chant the Gyatri mantra to start the day.
Namaste. Sat, Chit Ananada; truth, consciousness and bliss.
Posted by Martin at Thursday, February 19, 2009