I'm back home! I left England in the depth of a January winter I have come back to the miracle of Spring - greener and with more flowers than I ever saw in India.
So how can I summarise India? It is more of a continent than a country and inevitably I only saw a little of it.  I spent very little time in large cities, but I did travel from the very southernmost tip of India, up to the foothills of the Himalayas in three months.
It has changed in the twelve years since I was there last. It is more crowded. Everyone seems to have a mobile phone - there are 350 millions mobiles in India. Bottled water and the resulting plastic bottles are everywhere along with plastic bags.  Often, with no bins or means of rubbish collection, plastic lies everywhere, and is eaten by cows or burnt releasing toxins. 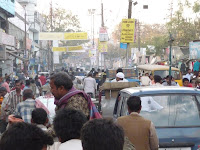 It is a country without atheists where spirituality suffuses everything. A sense of the sacred is everywhere. It is also a country full of contradictions; I saw a woman perform her sacred Ganges worship and then throw her bag of rubbish into the river. It is impossible to separate deep spirituality from habit and superstition.  The line between politicians, Bollywood film stars and Gods is blurred.  By the side of the road there can be a coloured concrete statue of a local politician complete with sunglasses. Motorcycles can have five or six people on them without any sign of a crash helmet. Traffic is so chaotic that it is a wonder that the very high death rate isn't even higher (at present about 140,000 a year killed). Air pollution in cities is awful and getting much worse as more families get cars.  Of course this chaos is also vibrant aliveness with the  vivid colours of the saris and the flowers alongside the dilapidated paintwork and rubbish. 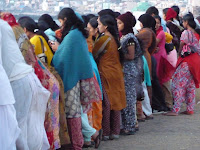 However, I wasn't there primarily as a tourist. In the South I was mostly learning mantras, attending satsangs and seeing Shiva temples. In Varanasi I was meditating, performing pujas and learning more of Kashmir Shavism; and in Rishikesh I was learning and practicing tantra-yoga.  All drawing from the vast spiritual heritage of India. The Dravidian culture in the South going back perhaps over 7,000 years; Varanasi having been a spiritual centre by the Ganges for over 4,000 years; and Kashmir Shavism, only being written by Abhinavagupta a thousand years ago is a compliation of spiritual  pratices and wisdom developed and elaborated over  many thousands of years.
The high point of India tantric culture was about a thousand years ago. Society then was positive about sexuality and women, there was a vibrant culture. All civilisations rise and then decline and for India the immediate cause was the Muslim invasion, followed by the Portugese and finally the Puritan British colonisation.  Temples and statues were destroyed, women had to wear saris and finally the India middle class became more puritanical than the British campaigning to ban devadasi, the temple dancers.

There is a sense of a culture in decline now which industrialising and having call centres and more computer programmers than America won't arrest.  If I had to put my money on India or China, I would choose China despite it having an aging population whereas India has a population where three quarters are under 40. The pressure of overpopulation and pollution together with the pervasive poitical corruption and administrative inertia is everywhere. It is a beautiful country but behind it all I feel a sadness at the lack of interest and curiosity most Indians have in their own cultural heritage. Perhaps it is only through foreigners' interest that they can re-learn what a precious jewel they have.
Posted by Martin at Thursday, April 16, 2009