Last night was the Spring Equinox, the equal balance of day and night. We did a short fire ritual at sunset as the very full moon rose with the havan kund, the inverted copper pyramid with a fire of cow dung, ghee and small sticks.

We chanted 108 times the Maha Mrityunjaya Mantra; Om, Tryambhakam Yajamahe, Sugandhim Pushtivardhanam Urvarukamiva  Bandhanan  Mrityor  Mukshiya  Maamritat, Swaha! and with each "Swaha"  offered some rice to the flames. A precise translation is;  Om. The three-eyed one / we worship. The fragrant / sustainer of this world. Like a cucumber / from its stem. From death / liberate / not from immortality. 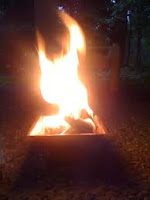 In this mantra, Shiva is addressed as the three-eyed one. The deeper meaning of the term “Shiva”, that which is auspicious and benevolent. Shiva is not merely a specific deity among other deities, but is Absolute Consciousness or Godhead. The third eye is the eye of wisdom, which stands for spiritual vision and knowledge beyond the duality of past and future, knower and knowledge, subject and object. The third eye is not only associated with spiritual realization and meditative vision, but also stands for Shiva’s power to destroy evil. In Hindu mythology, Shiva is known to destroy evil with a mere glance from this third eye, especially when his righteous anger is aroused.

We didn't do another chant to Shakti as if to balance things up. Western tantra seems to have made Shiva and Shakti into a modern egalitarian couple (traditionally it was more likely to be Shiva and Parvarti). There is no easy equal symmetry here. At the deepest level Shiva and Shakti are One - like the wave and the ocean or water and wetness. Above that Shiva is absolute consciousness and therefore the base on which the whole world is created through Shakti. Enjoy Spring and the blossoming of all that is created, grown, and reborn.
Posted by Martin at Monday, March 21, 2011