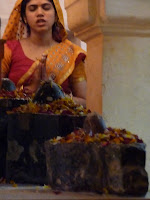 Tonight is MahaShivaratri - the great night of Shiva, the male principle.  This is a festival observed in honour of Lord Shiva and it is believed that on this day Lord Shiva was married to Parvati. Shiva is the male principal. How often today do we think of worshipping the masculine as the Divine Masculine, who's greatest desire is to serve the Goddess by creating safety, making and holding space and witnessing without judgement?


Traditionally,  people observe a strict fast on this day. Some devotees do not even take a drop of water and they keep vigil all night. The Shiva Lingam is worshipped throughout the night by washing it every three hours with milk, curd, honey, rose water, and anointing with flowers, whilst the chanting of the Mantra "Om Namah Shivaya" continues.  This picture is one I took in Varanasi three years ago. This year, I celebrated early at the weekend at the Winter Bhakti Gathering (http://winterbhaktigathering.co.uk) with about 150 others. Beautiful chanting; amazing people... How much the world needs again the dance of the Divine Masculine and the Goddess rather than the mutual wounding of the dysfunctional masculine and the wounded feminine. Find a good man and celebrate him!!