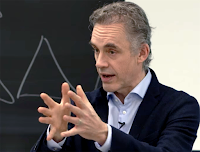 Unless you have been living in a cave you will have heard of Jordan Peterson. He is all over the Web and particularly You Tube with at least 300 videos – (often put up by others and badly titled). The subjects cover a vast range from The Bible, relationship advice, extended commentary on Disney's The Lion King, diet, gender, equality and above all, his dislike of the effects of post-modern deconstructivism particularly on young people.

He is a clinical psychologist and a Jungian. This in itself is rather unusual but it means he can bring both research results (he has authored 120 research papers),  and archetypes to bear on whatever he has in his sights; as well as clinical experience. Most Jungians are rather quiet, introvert and write books (such as Robert Bly and James Hillman) but Jordan Peterson is passionate, outspoken and very open (See interview with him and his daughter on his depression) .He is also spiritual, coming from his life experience and philosophical enquiry.

He rose to prominence from his objection to a Canadian law which would force him to use an invented pronoun to refer to transgender people. He argued that language evolves rather than being legislated and what you call someone comes from a relational connection not a law. He immediately became the target of protests - but received a great deal of support from transgender people who disliked being used for political purposes.

He says a great many things that to some seem very controversial and to others; like me mostly seem rather obvious. But he states them in a powerful way usually backed by research. As a result of his stand and outspokenness he is often misunderstood in the heat of the debate. The most famous example is a recent Channel 4 interview (See Link on Analysis of this).

His most watched video An Introduction to the Idea of God has had 1.6 million views.
Apparently 80% of those who watch his You Tube videos are men; even though many of those videos are lectures he gave to psychology students 80% of whom are female.  Clearly JP is saying something to young men. Has a message which is particularly pertinent for that group; grow up, take responsibility, find a moral and ethical framework to live by, discover the complexity and depth of life.  Nearly all women would want this of the men in their lives; given that our society tends to keep men as perpetual disgruntled, and sometimes fatherless adolescents - as most of the school shooters in USA are.

Turning to tantra. Jordan Peterson's philosophy of life covers every aspect of;  "Life, the Universe and Everything" and this is absolutely true of tantra as well. This means that there should be many points of connection and correlation.   He has not; (as far as I know) made any direct reference to tantra but the list on his website of his approximately 50 recommended books includes two from Carl Jung on Psychology and Alchemy and the momentous Mysterium Coniunctionis. Alchemy is the part of the European tradition of tantra. The list also includes Mirace Eliade's Shamanism: Archaic Techniques of Ecstasy.

These books are not particularly accessible or seen as directly relevant to most young people (neither is tantra unless they think it is only about sex!) but aspects of his philosophy; such as the need to walk the edge between order and chaos (See here) illustrated by the familiar Yin-Yang symbol are clearly tantric. His call for men to step up to engaging fearlessly with the world rather than hiding in nihilistic or dis-empowering philosophies is straight from the Shiva traditions of tantra with the call to wake up; become aware and embrace the virya; the warrior whose role is to engage the power of  presence.  He believes that meaning can come from dialogue and not from the deconstruction of all meaning. He also believes that not everything comes from social construction and societal pressure but to an extent there is a biological and neurological underpinning. This is absolutely standard from neuroscience and from research, but unfortunately, the general climate of anti-intellectual and anti-science; which gave us Trump and "fake news", is usually not interested in debates about evidence.

He described his own politics as those of a “classic British liberal … temperamentally I am high on openness which tilts me to the left, although I am also conscientious which tilts me to the right. Philosophically I am an individualist, not a collectivist of the right or the left. Metaphysically I am an American pragmatist who has been strongly influenced by the psychoanalytic and clinical thinking of Freud and Jung.” He also said  ”I’m and Existentialist". He believes in virtue, respect, gratitude and hard work.

He can certainly be criticised for making sweeping statements on a broad range of areas of social concern. Many people prefer academics and clinicians to stay in their own ghettos. Much of what he says appeals to men who are in some danger of moving towards a far Right  way of thinking as they feel so marginalised. Curiously, this is taken as a criticism. Rather like saying that Christians shouldn't talk to sinners when that is exactly who they should be talking to!  His style can be somewhat hectoring; but as a lecturing style to students, this engages them when otherwise they would be tempted to sleep through the lectures. He talks of topics that are of real concern to people; like relationships and career and the nature of creativity.  He dialogues with anybody with genuine enquiry. There are dozens of videos of these dialogues with Russel Brand or Ben Shapiro or Camille Paglia and many critics and activists; black, white, trans and so on.

Jordan Peterson brings a mixture of a background in a Jungian sense of the mystical with research date and trait theory. His somewhat depressed personality may affect his sense of what is possible and it grates on much New Age optimism. He is pragmatic, seeks the middle way and recognises that life involves suffering. Classic Buddhist notions. The place where he doesn't interface with classical tantra is his lack of practices other than a sort of stoicism in the face of the difficulties of life and taking responsibility for ones own life.  This is a good foundation but needs more.  One of the core meanings of the word tantra is "practices" or methods and Jordan Peterson is weak on practices but strong on the basic principles of Shavite tantra. Chaitanyamatma or "consciousness is everything"; or as Jordan Peterson would put it; Wake up! Grow up! Show up and take responsibility in your own life!